Barbie would be shook at the sight of Royal Melting Club, a conspicuous all-pink cafe that is hard to miss. If you love anything extra and need some colours in your mundane life, this is exactly where you need to be. The first thing you’d notice about Royal Melting Club is its exuberant use of the colour pink. Even from a distance, the cafe is eye-catching due to its entirely bright pink facade. Outside the cafe, a giant figurine of the cafe’s mascot sheep character greets you. Noticeably, the sheep’s ears, mouth, and eyebrows are pink in colour, and there’s even a pink spade on the smiling mascot’s chest. The pink paradise theme continues in the interior. Almost every inch of the cafe is splashed with pink – even details such as wine labels and packaging boxes are pink. The furniture in Royal Melting Club, such as chairs that are designed to look like thrones, look vaguely inspired by royalty, hence explaining the cafe’s name.

Pieces of art around the cafe The design of spades is a recurring motif in the design of the cafe. Apart from its mascot having said motif on its body, spades also appear on the cafe’s wallpaper, window panes, and carpets.

Another unique feature of Royal Melting Club is the moving carousel next to the entrance of the cafe. Instead of the horses and unicorns you’d expect from a carousel, this ultra cute one features the cafe’s lamb mascot. Unfortunately, the carousel is kept behind a glass display and is for viewing only. The cafe is passionate about art and creative expression. There is a separate room in the middle of the cafe that is often used as an exhibition space. The current exhibition displays several art pieces, such as a giant pink dice, littered across the room. Those who want to take part in this artsy atmosphere and contribute something to the room can make use of the bucket of chalk markers to doodle on the walls. Of course, everything in the exhibition space is tied together by shades of pink.

Desserts that come with a pop of colour Royal Melting Club’s desserts are one of the few aspects of the cafe that are not exclusively in pink. The cafe specialises in colourful and maximalist pastries, such as cupcakes with rainbow fondant, cakes with 3 different coloured and flavoured layers, and cookies made out of mint-coloured dough. These treats range from KRW7,000 (~USD5.40) to KRW8,500 (~USD6.56). Larger orders are served on a pink cake stand. Before Royal Melting Club was established as a full-fledged cafe, it was a small business that specialised in custom cakes. The cafe still offers this service today if you call and express your interest. The talented bakers can create a wide assortment of cakes, from tiered artisan cakes to cartoon cakes perfect for children’s birthday parties.

Getting to Royal Melting Club 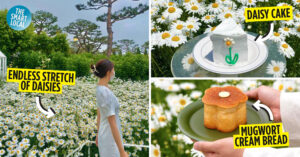 Mahogany Coffee: Cafe In Incheon Known As The Daisy Paradise, Best To Visit In May & June
Anata Cafe: Quaint Japanese-style Cafe In Gimhae, A Paradise For Ghibli Fans With A Sweet... 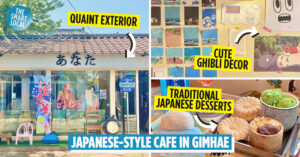