As borders reopen and travelling resumes, many people are making their way to South Korea, one of the top tourist destinations in the world. Here’s a South Korea public transportation guide that makes getting around in South Korea much more manageable.

The following 3 transportation apps are must-downloads that will help you navigate your way in Korea. 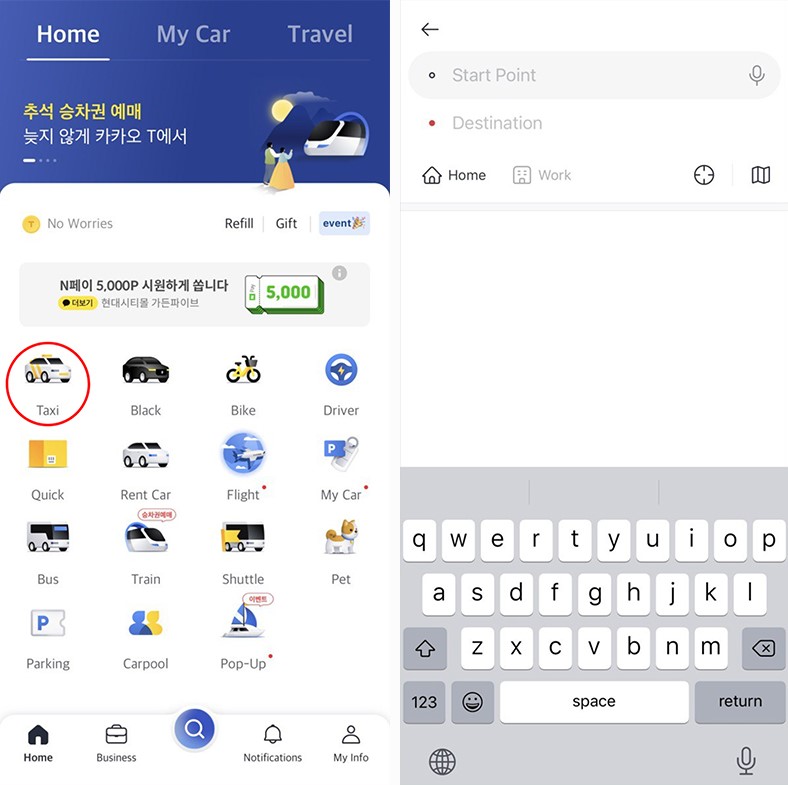 If you are not comfortable with reading and speaking Korean, consider downloading the Kakao Taxi app, which is available on both the Apple App store and Google Play Store.

The Kakao Taxi app automatically syncs with your phone system’s language. However, you can choose to change it to other languages such as English, Korean, and Japanese.

Once you have set up your account, you will be brought to the homepage, where you can find all the services offered in the app.

To book a taxi, tap “Taxi” and input your pick-up location and destination. 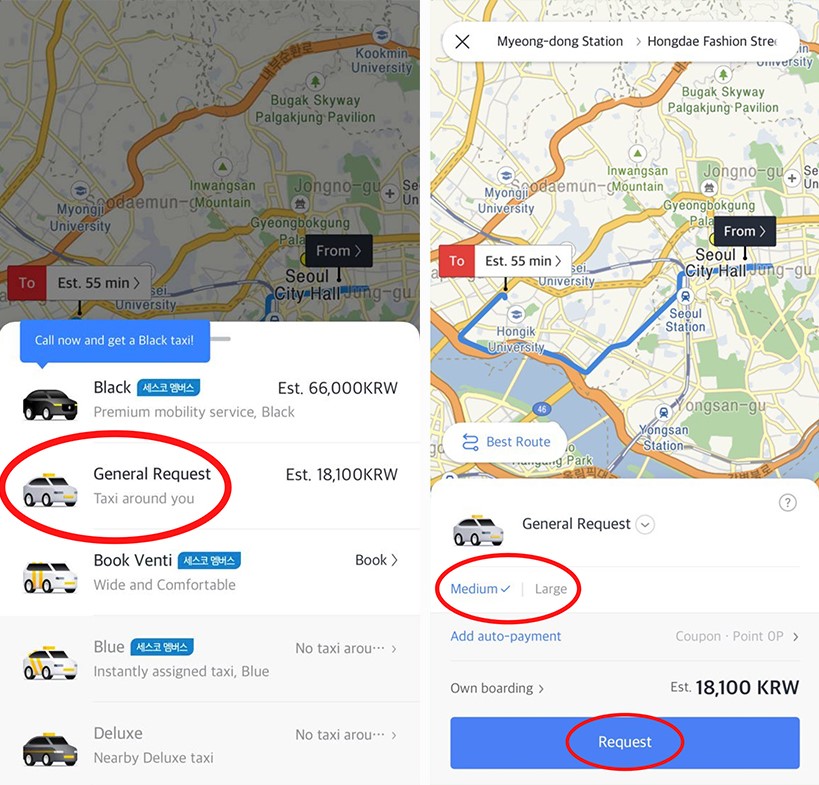 We recommend picking the “General Request” option as it is relatively affordable. The black taxis, also known as “모범택시” (mo-bom-taek-ssi), are deluxe and hence pricier than general taxis, so avoid them unless you have deep pockets.

You can even choose the size of the taxi you want – “Medium” refers to standard 4-passenger taxis and “Large” are 6-passenger taxis. Once you’ve made your choice, tap on “Request” to complete your booking.

Kakao Taxi app does not accept foreign credit cards, so you’d have to pay the driver directly with your preferred mode of payment. 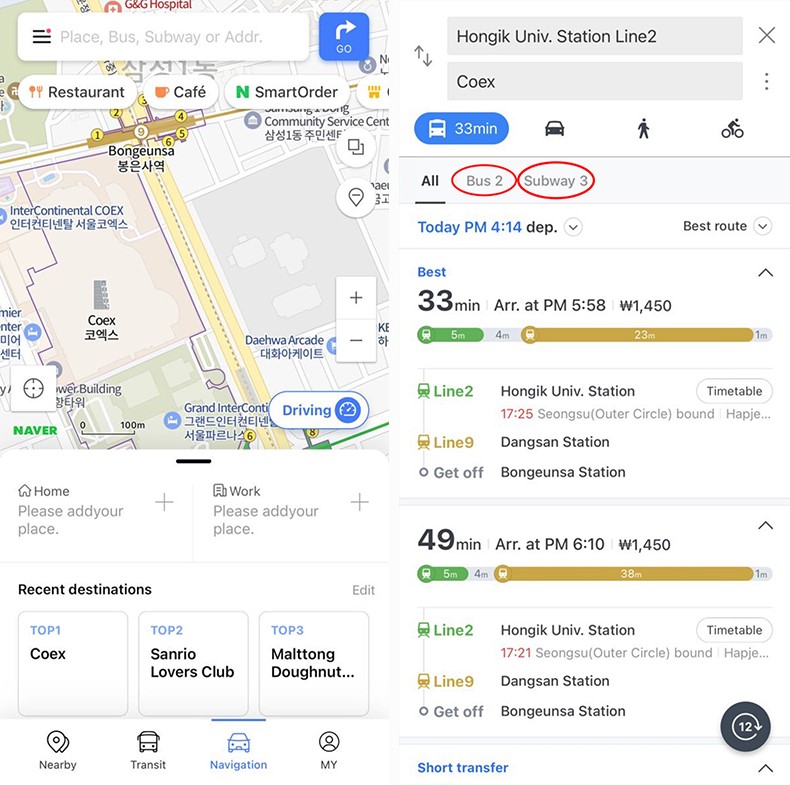 Google Maps does not work well in Korea. Instead, we recommend downloading Naver Map for accurate navigation. The Naver Map app is available on both the Apple App store or Google Play Store.

Like Kakao Taxi, Naver Map automatically syncs with your system’s language. Again, you can choose to change it to other languages such as English, Korean, Japanese, and Chinese.

Input your starting point and destination. Naver Map will then provide multiple route suggestions: the fastest route, the route requiring the least amount of transfers, and the route with minimal walking.

If you prefer taking only buses or the subway, tap on “Bus” or “Subway” to see routes that will only require your transportation of choice. 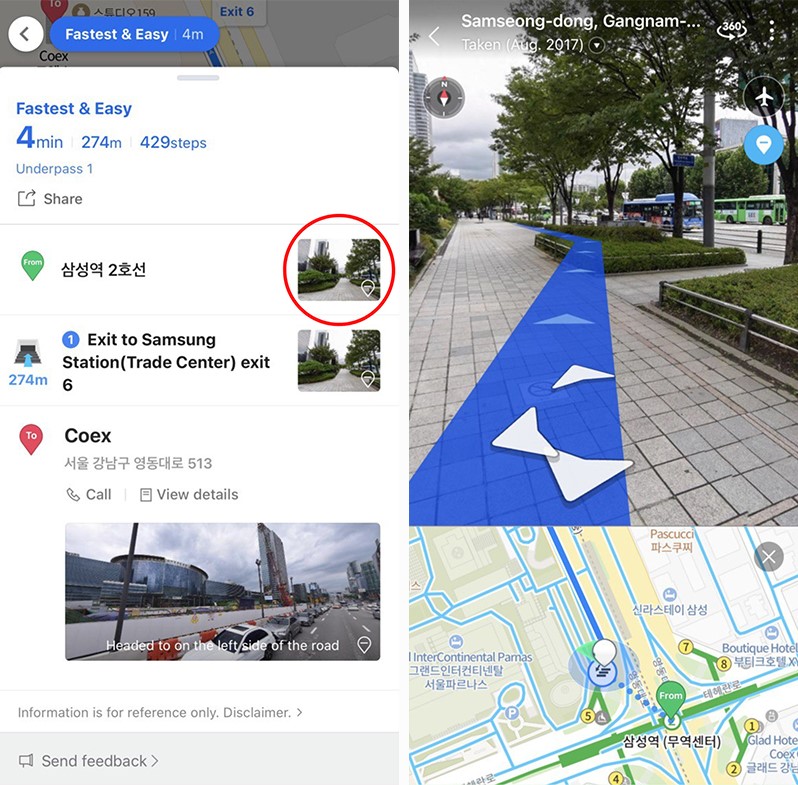 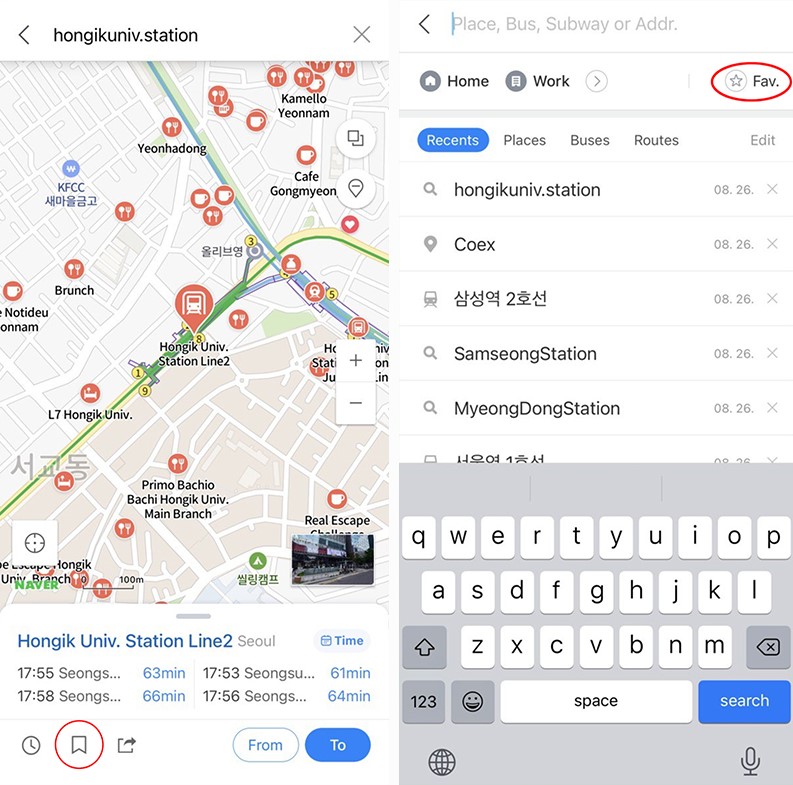 Bookmark your accommodation and frequently visited places so that you won’t have to input the address every time. Your bookmarked locations can be found under the “Favourites” section. 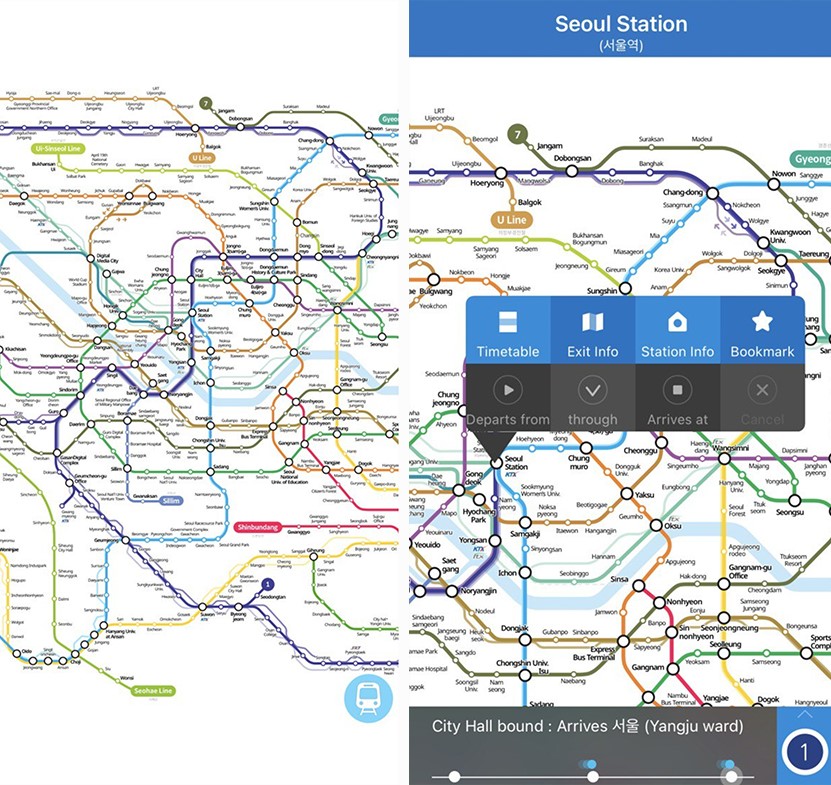 Both apps have a similar interface, and you can switch the app language to English, Korean, Japanese or Chinese.

You can easily toggle between subway maps for different cities, including the Seoul metropolitan area, Busan, Daejeon, Daegu, and Gwangju. 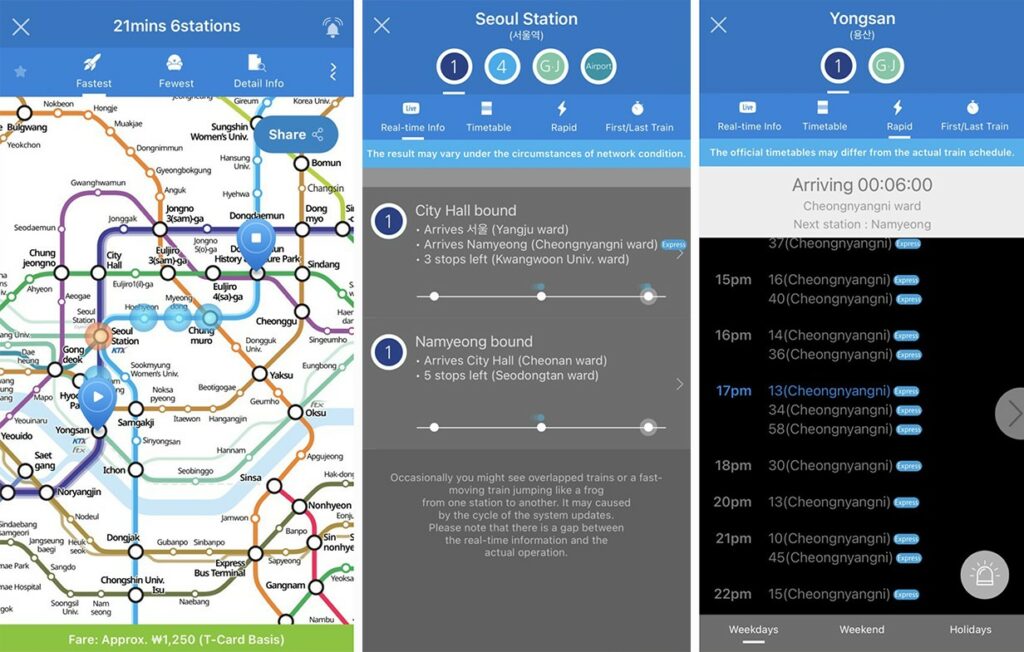 The number of subway lines in the cities may look overwhelming at first glance, but all you have to do is choose your starting location and destination. The app will recommend the fastest route and the route with the least number of transfers.

Other than route suggestions, you can also access real-time train information and the rapid train schedules. Rapid trains only stop at certain stations, which means you can reach your destination in a shorter time. 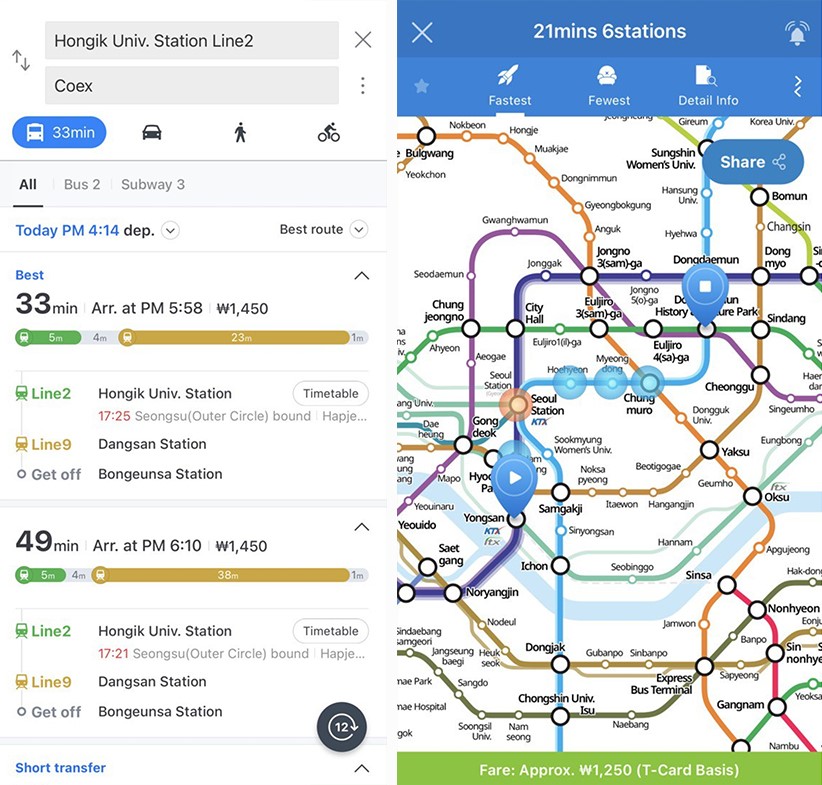 To avoid getting lost in a foreign country, always plan your routes in advance.

Use Naver Map to find the fastest and easiest routes to your destination. If the subway is more convenient, use the Subway Korea app instead.

By doing so, you can estimate the cost of your trip and enjoy your journey without having to waste time on finding directions.

2. Get a transportation card 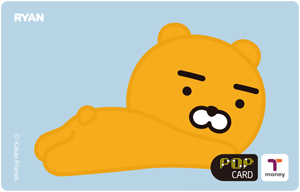 Get yourself a Korean transportation card, also known as T-money, to make travelling seamless. T-money comes in many designs, including ones that feature Kakao Friends.

T-money cards can be purchased from convenience stores such as CU, GS25, and 7-Eleven. If you are at the airport, you can purchase T-money cards at dedicated vending machines instead. 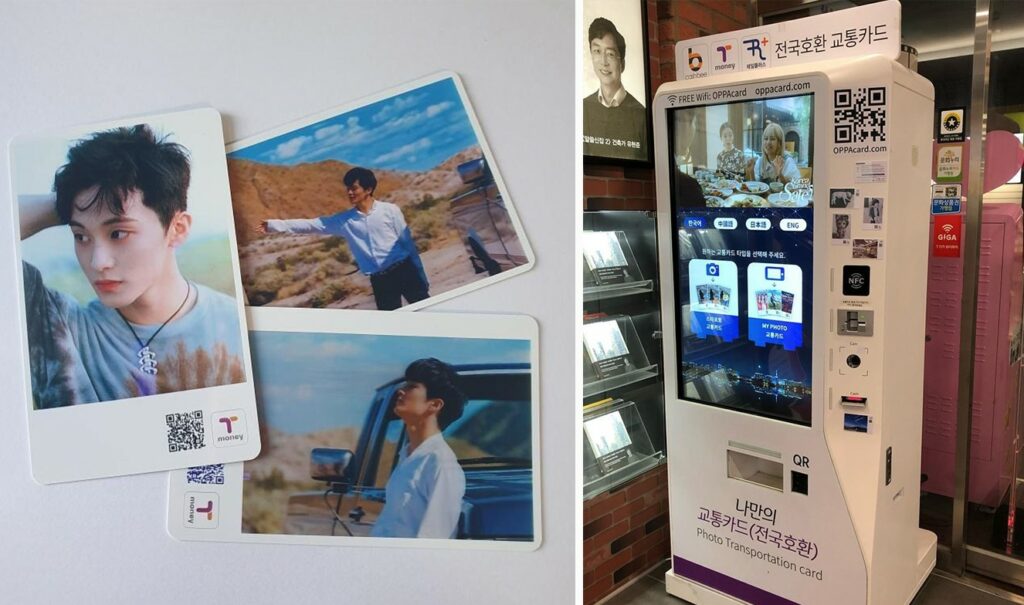 At certain subway stations such as Hong-ik University station and Seoul station, as well as bookstores and Daiso, you’ll find T-money card customisation machines. You can use it to print any photo of your choice on your T-money card – yes, that includes pictures of your bias.

3. Only cash is accepted for reloading of the T-money card 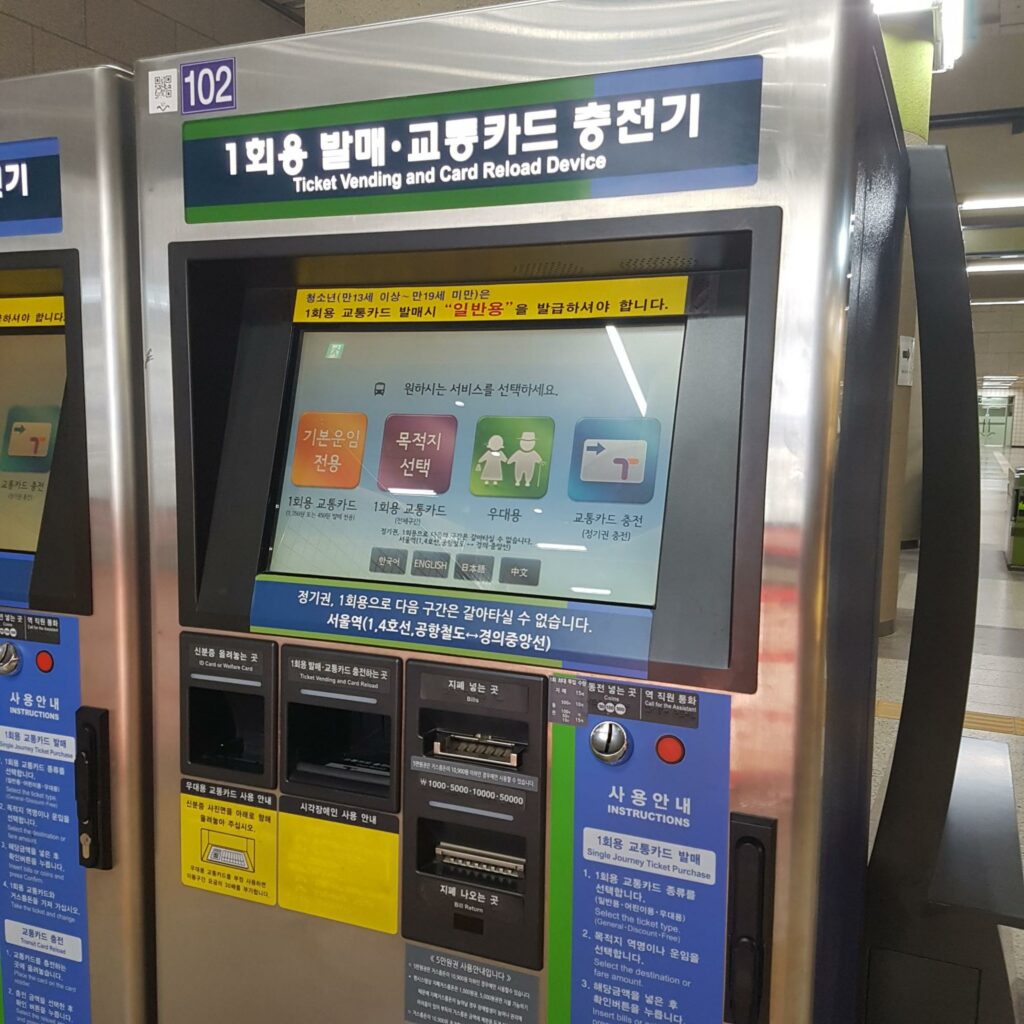 While card payments are preferred in Korea, you can only reload your transportation card using cash – even if you’re doing so in convenience stores.

The T-money card reloading kiosk does not accept KRW50,000 bills if your change exceeds KRW10,900. So, if you are not adding a large amount of money to the card, it is best to use KRW10,000 notes instead. 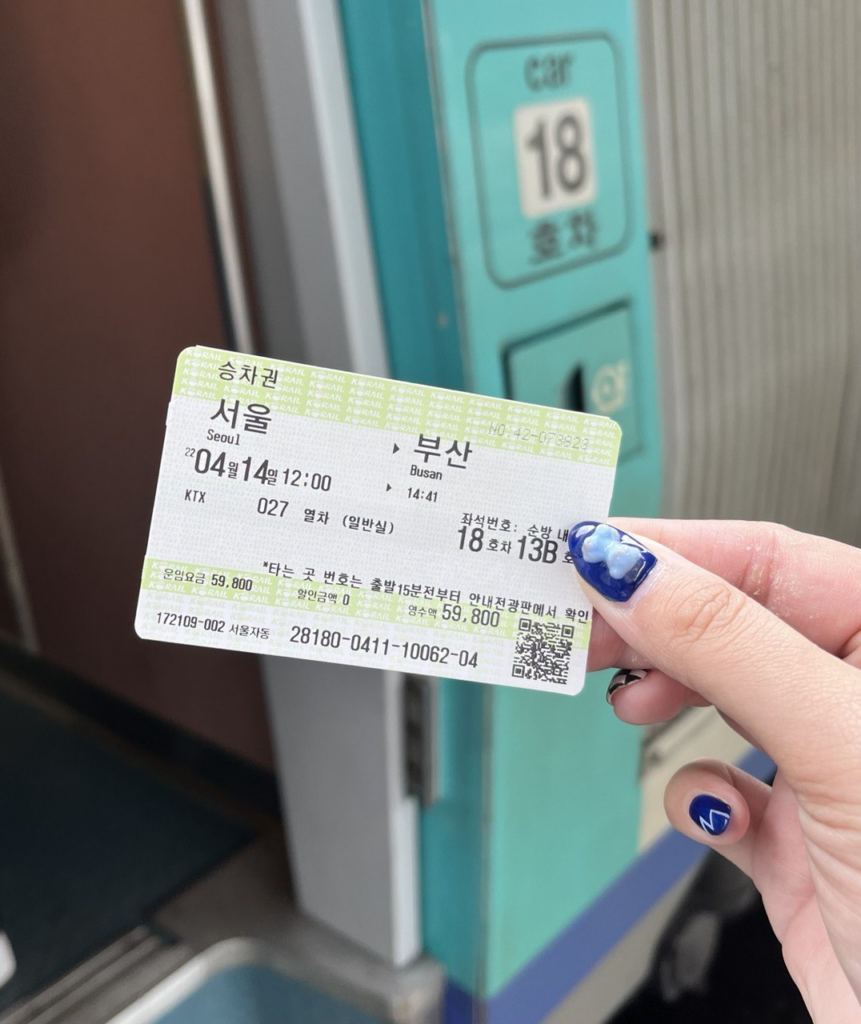 Always plan and purchase your tickets in advance as the seats might be fully booked nearer to the day of your trip. Buying your express bus tickets earlier will not just guarantee you a seat, but also give you more seat options to choose from.

Otherwise, if you don’t manage to get a seat, you’ll have to wait for at least an hour for the next scheduled express bus.

Bus seats with illustrations of a lady carrying a child in her arms, a pregnant lady, or a person using a crutch or a walking cane are reserved for those in need. 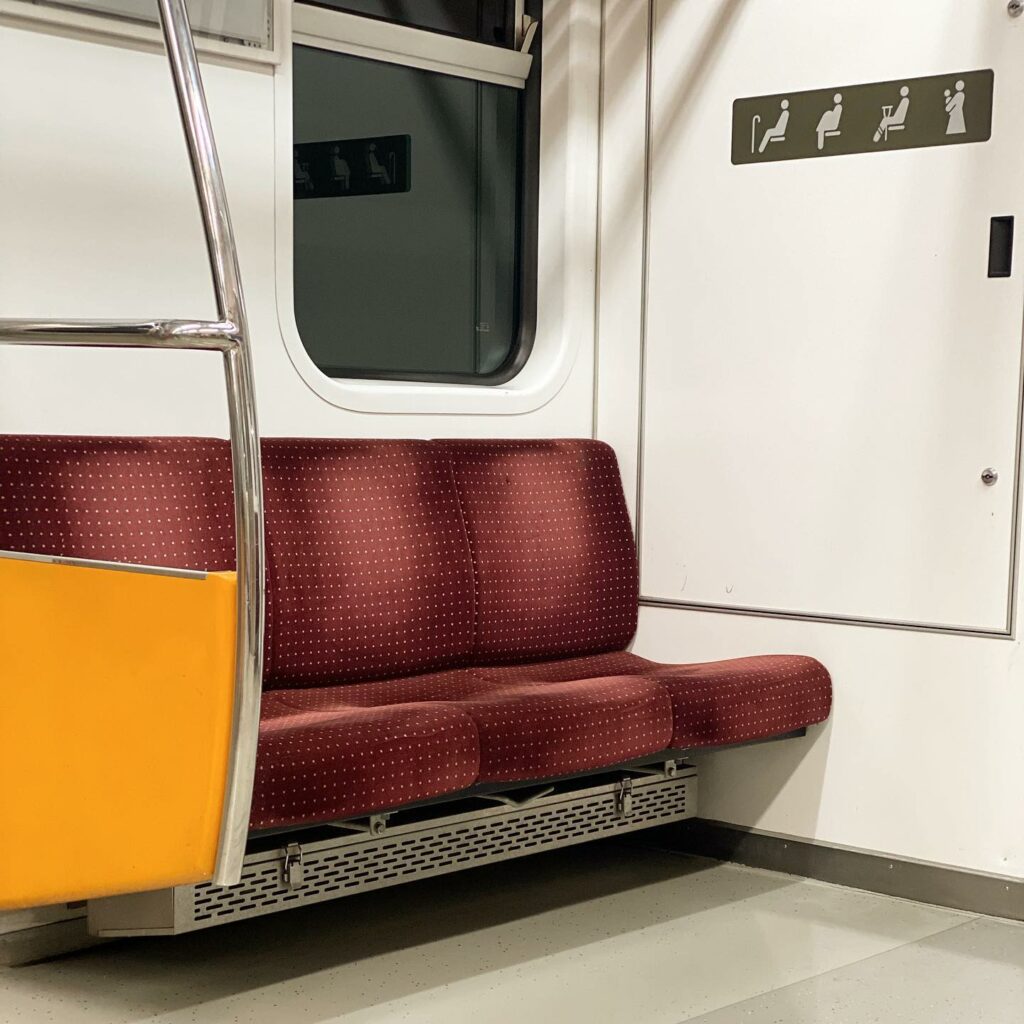 On each end of a train cabin, you will find 3 seats with the same illustrations, and yes, they are reserved seats as well. 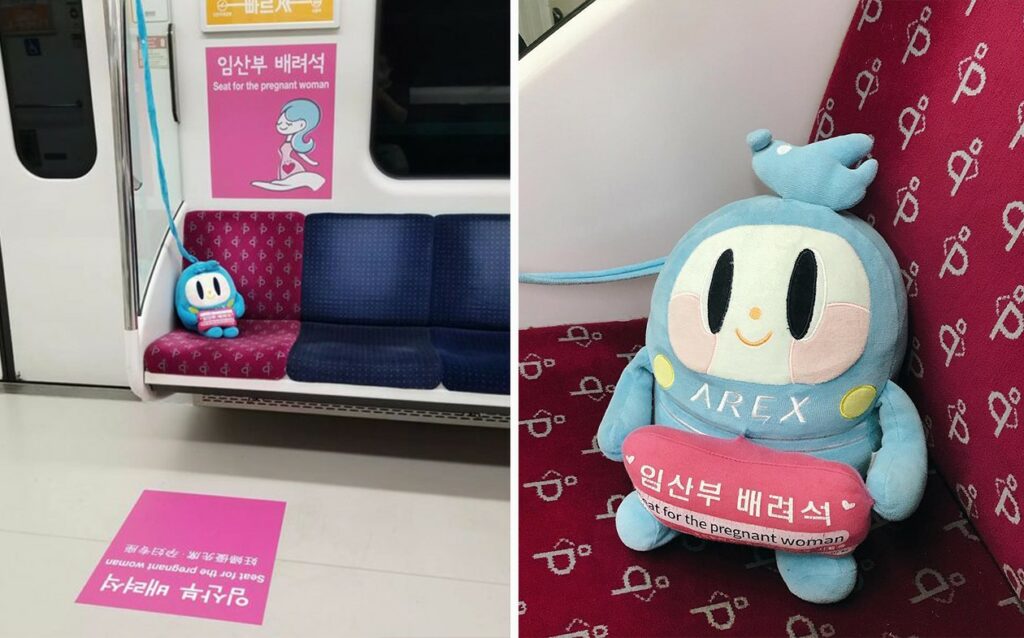 Pregnant women have designated reserved seats. These seats are usually pink and are clearly marked by stickers saying that they are reserved for pregnant women. There’s even a cute plushie guarding the Airport Railroad Express (AREX) reserved seat. When travelling with an elderly person or pregnant woman, look for signs with pictograms indicating that reserved seats can be found in that cabin.

6. Free Wi-Fi on all public transport 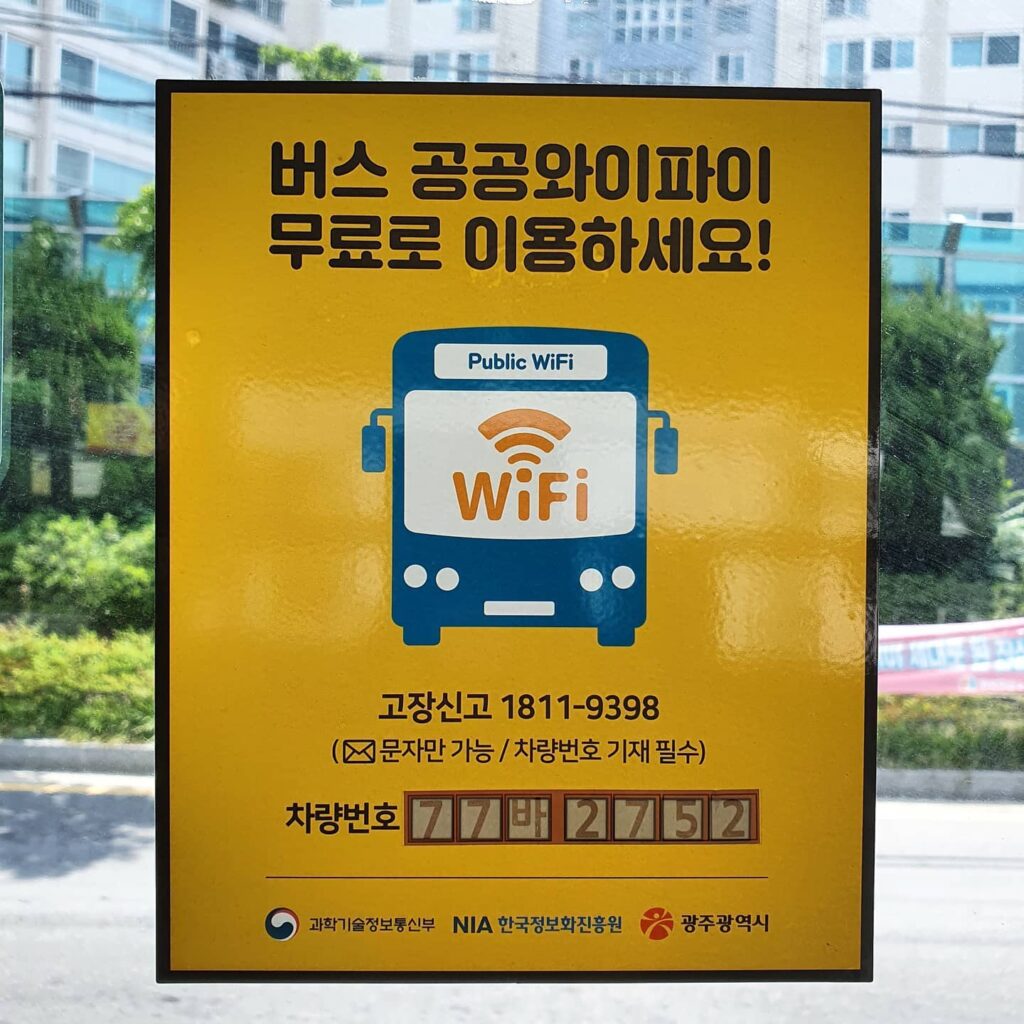 In South Korea, free Wi-Fi is available on all public transportation, including buses, subways, and trains. You can also connect to the internet for free at at subway stations.

Most buses come with public Wi-Fi, but some will need you to connect to the network manually by keying in a password. A sticker label with instructions is usually pasted onto the windows of the buses.

Free Wi-Fi on public transportation means you won’t have to worry about running out of mobile data, which is particularly useful for travellers on a budget. Buses in Seoul come in 4 different colours: blue, red, yellow, and green. Each colour represents a different type of route.

Blue buses travel long distances, usually from the outer parts of Seoul to central Seoul, while red buses are generally long-haul buses that travel in and out of the outer metropolitan area.

Each bus type has its own fare table, and it is cheaper to pay using your T-money card instead of cash. 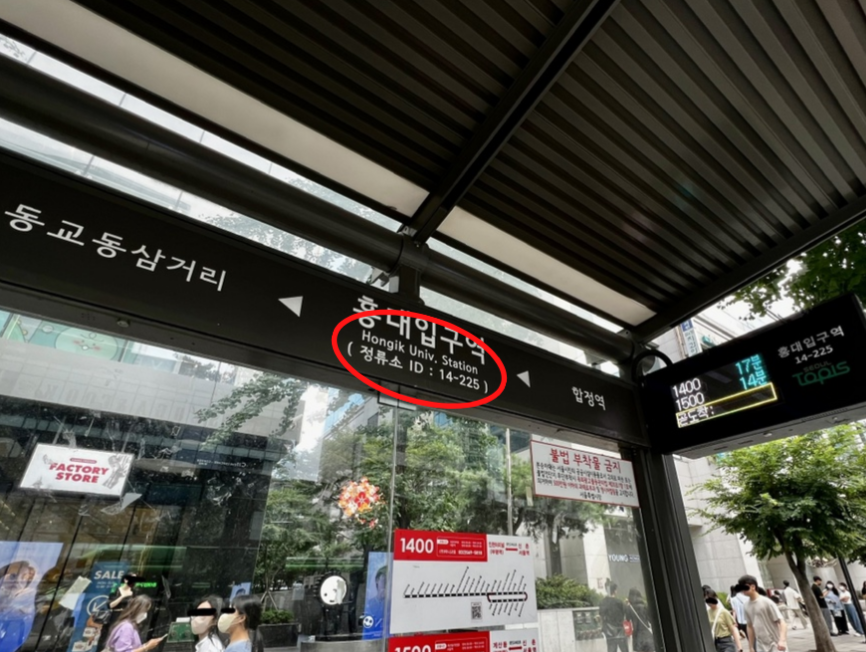 Each bus stop has an English name and a unique bus stop ID number. When using Naver Map, the app will state the name and ID number of the bus stop. Always check the ID number as bus stops on opposite sides of the road have the same name and you won’t want to board a bus going in the wrong direction. 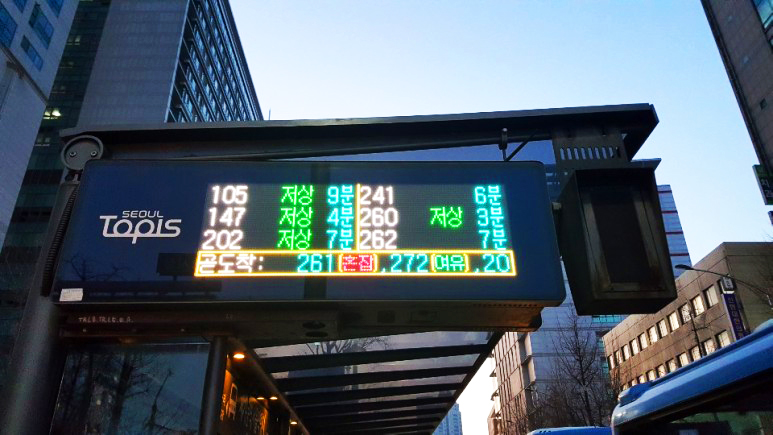 At every bus stop, there are electronic panels that tell you how long each bus is going to take to arrive.

The yellow box with the word “곧도착” (gott-to-chak) will tell you which buses will arrive soon and their occupancy levels.

10. Do not bring food & drinks onto the buses in Seoul In 2018, the Seoul Metropolitan Government banned bringing food and beverages onto public buses in Seoul. There are signs at the bus stops and buses reminding you that food and beverages are not permitted onboard, even if you aren’t planning on eating or drinking onboard.

Note that bus drivers are allowed to deny you entry if you try to carry food and drinks onboard. The bus drivers may also ask you to throw your cups away into the bin available on every bus.

11. Tap your transportation card once & pay for 2 or more

It’s possible to pay for you and your friend with just a single tap. Simply tell the bus driver “두 명이요.” (du-myeong-i-yo; 2 people), and they’ll charge you the bus fare for 2 passengers. “두” means 2, so if you are paying for more people, just change the number and tack on “명이요” (myeong-i-yo).

If you are travelling with children, you can tell the bus driver how many adults and children to charge.

Allow the bus driver to press some buttons and work their magic, then tap your transportation card on the T-money card reader to pay.

English is not the primary language spoken in Korea. However, you can still find English translations on direction panels, kiosks, and on public transportation.

Taking the bus is not as scary as it may seem. All buses and trains have English displays and announcements so you can alight at the right stop or station even if you don’t understand Korean.

13. Press the bell on the buses if you have to alight

When taking buses in Korea, press the “Stop” bell to let the driver know that you wish to alight. The bells on each bus may differ. Look for a red bell with the word “하차벨” (ha-cha-bel) or “Stop” on them.

Also, remember to tap your transportation card when you board and alight the bus to receive a transfer discount. 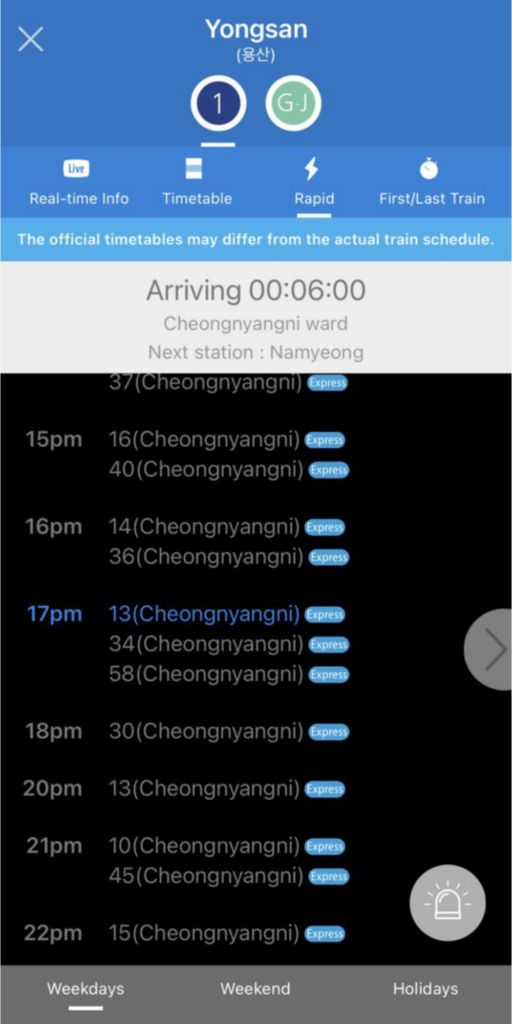 Rapid trains are available on subway lines 1, 4, 9, Suin-Bundang and Gyeongui-Jungang. They are express trains that only stop at certain stations along the subway lines. Take the rapid train if you are in a rush or want to arrive at your destination in a shorter time.

All the trains in Korea, including rapid trains, follow a fixed timetable. As such, you’ll have to show up on time or risk having to wait up to 30 minutes for the next express train.

As the rapid trains use the same platform as the regular trains, make sure to board the correct train. In Busan, you can find train cabins that are reserved for ladies. These cabins operate daily from 7am-9am and 6pm-8pm. Besides women, infants and children below 12 years of age are also allowed in this cabin.

Though these cabins aim to allow female travellers to travel comfortably, they’re not managed by any staff, so be prepared to see uncooperative people who still board the cabin during operating hours.

16. There are no trains on Jeju Island 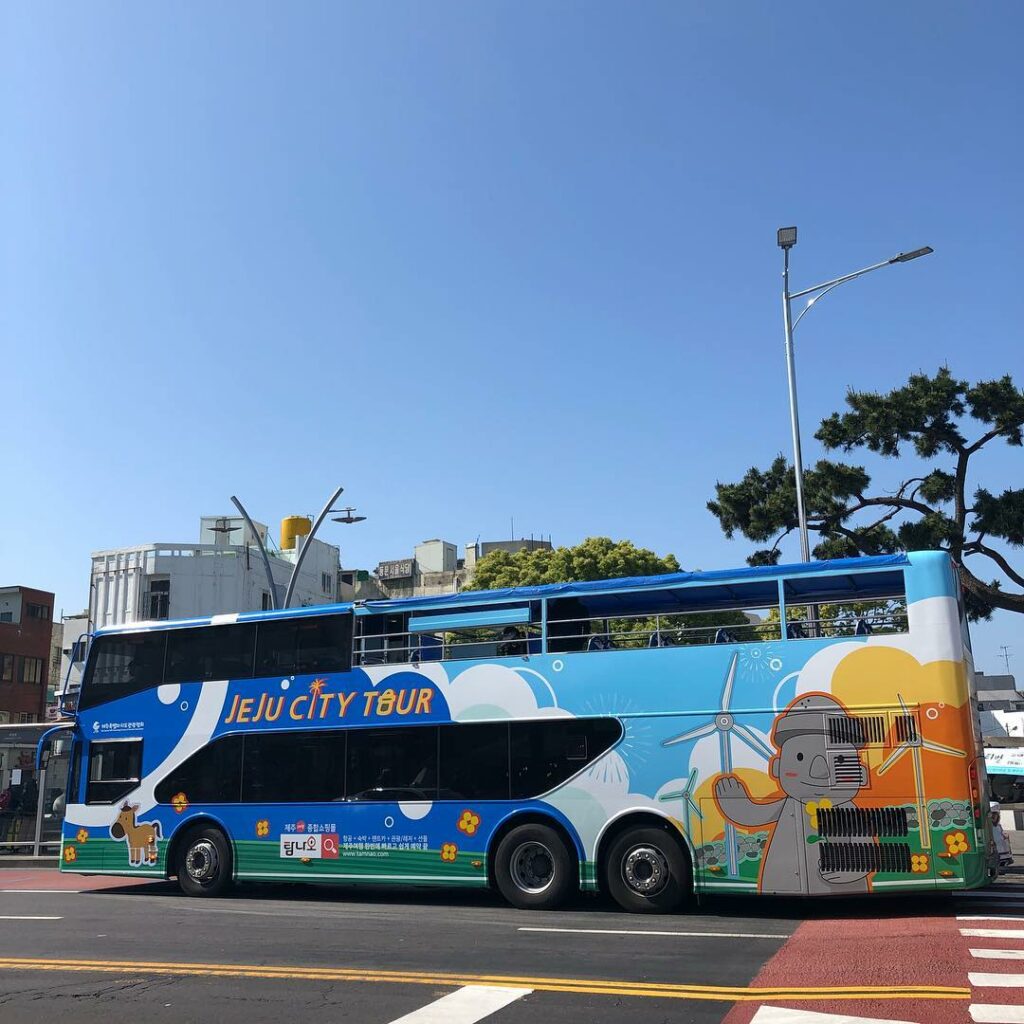 Unlike other cities in Korea, there are no subways or trains on Jeju Island. The main form of transportations are cars, public buses, and taxis.

From the airport, you can take the airport limousines buses 600, 800, and 800-1, which will send you to different parts of the island. 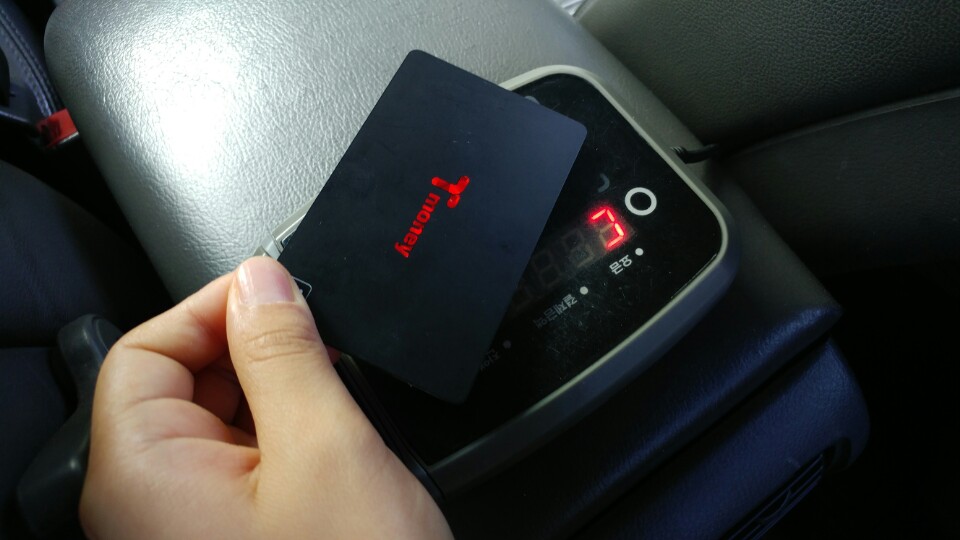 The T-money card is an all-in-one transportation card that you can use to pay for bus, subway, and even taxi fares. You can also use them to make payments at convenience stores and other participating stores.

Most Kakao Taxis take T-money card payments, but some don’t. If you choose to flag a taxi, you make sure to look for taxis with the T-money sign to pay using your T-money card.

If your taxi does not take T-money as a form of payment, opt for cash or credit card instead.

Travelling in a foreign country seems overwhelming, but travelling in Korea is definitely not. We hope our South Korea public transportation guide, tips, and app recommendations will help you travel like a true local. 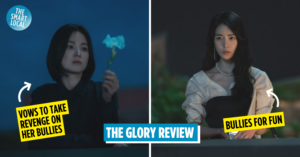 The Glory Review: How A Victim Of Bullying Takes Down Her High School Tormentors
12 LOONA Facts That Will Give You A Heart Attack & Make Them Your FavOriTe... 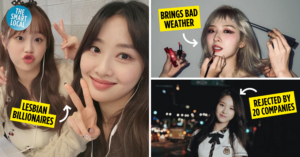