With an abundance of stylish and trendy cafes in Korea, tourists and locals alike have way too many options to choose from. Contrasting the modern and state-of-the-art cafes is Cha-teul, a traditional teahouse with a view of the mountains and surrounding greenery.

Traditional teahouse with a view of the mountains Even before entering, you can tell that the teahouse has a rich history based on its traditional exterior alone. Cha-teul is a 100-year-old traditional teahouse located in the midst of Bukchon Hanok Village. Like many hanok houses, floor seating is implemented. Customers have to sit on traditional cushions that are placed on a heated wooden floor. Thanks to its prime location and huge windows, customers can enjoy a view of the nearby mountains and an overview of the rest of the village from within the teahouse.

Courtyard in the heart of the teahouse In the centre of the teahouse lies a small garden with an empty stone pond. There are statues placed in the pond, as well as dotted through the rest of the courtyard, adding to the traditional Korean hanok aesthetic of the place. There is an abundance of plants around the teahouse, with some of them sprouting seasonal blooms throughout the year.

After enjoying your meal, take a stroll through the courtyard, where the ground is covered with pebbles and granite stepping stones. There are both outdoor and indoor seating available. If you opt to sit outdoors on their veranda, you get an up close and personal view of the beautiful greenery surrounding Cha-teul. The menu at Cha-teul is just as impressive as its aesthetics. Cha-teul’s menu items are not only appetising, but also visually appealing. Their flower iced tea, which is served in a glass cup that is shaped like a bloom, uses small flower buds as a garnish. On top of that, the teahouse’s staff will blow you away with their excellent service.

Some of serving staff speak fluent English and even boast fancy tea-pouring skills. We know it doesn’t sound impressive on paper, but wait till you witness it for yourself. The staff are eager to share with customers the ingredients and health benefits of each beverage, and to show off their tea presentation abilities.

It’s easy to get lost in the hustle and bustle of the vibrant city, so why not visit Cha-teul to take a breather from the rush and enjoy a soothing cup of tea? 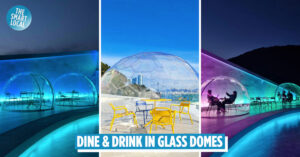 EL16.52: Busan Cafe Where You Can Dine In Glass Domes While Admiring The Sea & Cable Cars
Gangchon Rail Park: 8.5km Rail Bike Park In Korea With Scenic View & Music In... 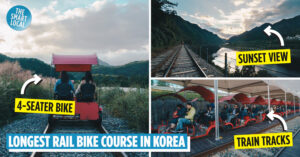