Korea is undeniably a food paradise. No matter what you’re hankering for, be it a piping hot bowl of tofu stew or a grab-and-go gyeranbbang (egg bread), you’ll be able to get your hands on it just about anywhere. But why not go beyond the usual dishes and seek out some Korean traditional snacks instead?

Some of these sweet treats have a colourful history and were even served in royal courts – you can say you’re literally eating a piece of history.  We’ve sussed out 10 Korean traditional snacks you have to try. It’s hard to find these snacks outside of Korea, so do remember to hunt them down the next time you visit the country. Yakgwa is a traditional honey cookie that’s shaped like a flower. When translated to English, yak means medicine, while gwa means sweet. The treat is so named because of the health benefits and sweetness that honey has.

Unlike most cookies, this snack is prepared by deep-frying instead of baking. It’s made with simple ingredients like sesame oil, rice wine, honey, and ginger. Yakgwa is traditionally eaten during special occasions, such as Chuseok – which is equivalent to the western Thanksgiving – and weddings. These days, it’s also served in cafes and tea houses as the sweetness of the cookie compliments a cup of hot brewed tea perfectly.

Like most food, handmade yakgwa tastes the best. You can find most confectionery stalls in traditional markets selling it. But if you’re looking to bring some of these goodies back for yourself or as gifts for friends and family, pre-packaged ones are available in supermarkets. You can also try your hand at making this Korean traditional snack at home when the cravings hit. 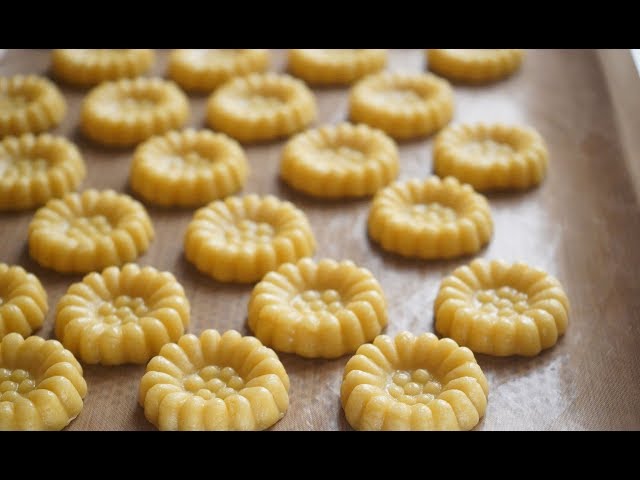 It is said to have origins in a Chinese snack called sachima. Like its Chinese counterpart, a thick sugar syrup is used to hold all the contents of gangjeong together, but a major difference is that sachima uses fried dough instead of rice puffs.

This bar treat comes in lots of flavours. Some are loaded with all sorts of seeds and nuts, while others include dried fruit bits.

To get your hands on some freshly made ones, head down to the traditional markets in Seoul. And if you’re lucky enough, you might even get to see how this snack is prepared right before your eyes. As this traditional snack is still popular amongst Koreans today, some businesses have taken the opportunity to innovate and add modern touches to make it more appealing and palatable to the younger generation. Dalgona isn’t just a coffee trend – also known as ppopgi, it’s actually an old-school candy many Koreans enjoyed during their childhood. Stalls selling dalgona on the streets of Seoul used to be common, but the numbers have been slowly diminishing over the years. If you thought dalgona coffee’s recipe was simple, you’ll be delighted to know that the Korean traditional sweet is even easier to make. It only requires two ingredients: sugar and baking soda, and minimal stirring.

As such, it makes for a nice family bonding activity to do over the weekends, especially for parents who are running out of ideas to keep their children occupied. Prepare cookie cutters of different shapes to create different patterns on the candy before the sugar mixture cools and hardens. 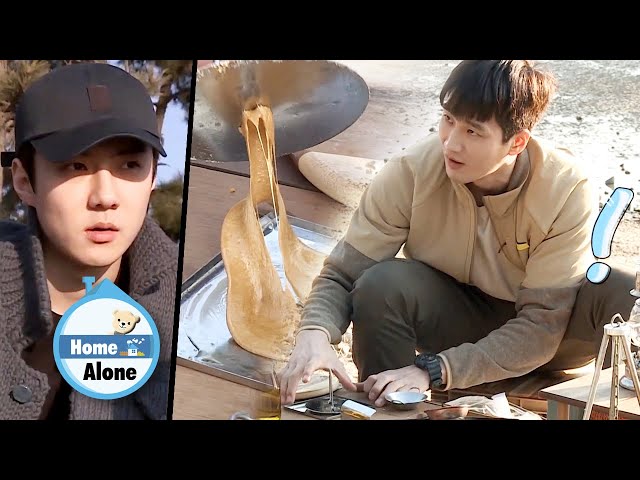 Bo Hyun from Itaewon Class and Sehun from EXO tried making this candy the traditional way when they appeared on the variety show I Live Alone. Rice cakes, also known as tteok, are a staple in the Korean diet. Besides savoury dishes like tteokbokki (spicy rice cakes) and tteokguk (rice cake soup), you can also find it in desserts. Songpyeon (pine rice cakes), for example,  is a popular sweet treat that’s commonly consumed during Chuseok (autumn harvest festival).

It’s said to represent wealth and prosperity, and many families still get together to make this Korean traditional snack during Chuseok. Songpyeon is commonly stuffed with a red bean paste and comes in a variety of colours. These colours are achieved by using natural ingredients such as gardenia seeds, mugwort, cinnamon, and other dried fruit powders. The rice cakes are then steamed on a layer of pine needles – an ingredient essential to making this snack.

While the traditional ones come shaped like a half-moon, many people have gone the extra mile during the festive season to create more intricate designs. Despite taking the form of a chrysanthemum, this bread tastes nothing like the flower. Instead, it has a taste and texture similar to that of Japanese taiyaki. You can find this bread in Insadong, a tourist hotspot easily accessible by Seoul’s well-established subway network. Most stalls sell this bread with a sweet red bean filling, but occasionally you’ll come across some that offer other flavours such as honey and peanut. Hotteok is a popular Korean street food that’s essentially pancakes stuffed with brown sugar, cinnamon, nuts and seeds. But little known to many is that it has roots in the Chinese shao bing, which was brought into Korea during the Qing Dynasty when Chinese merchants frequented the country for trade. The dough is made from a mixture of regular and glutinous rice flour, which gives it a chewy texture on the inside and crispy bite on the outside when fried. Flavours vary across different stalls, but honey and brown sugar are classics that will never go wrong.

Check out this article on how to make your own hotteok at home.

This chewy glutinous rice snack has a texture comparable to Japanese dango, but is very different in taste. Instead of being coated with soy sauce, gyeongdan is covered in different flavoured powders, such as sweet potato, green tea, and black sesame. And when biting into the rice ball, you’ll taste a subtle sweetness emanating from the red bean paste encased inside.

While the classic red bean flavour is a must-have, the ones with jujube, pine nut, and sunflower seeds are also worth a shout-out. Like the other snacks on the list, these sweet rice balls are easily found in most traditional markets. However, to enjoy this snack the authentic way, we recommend heading down to a traditional teahouse or a hanok cafe and ordering a hot cup of tea to go with it. Korean pancakes come in a variety of shapes and sizes. Susu bukkumi is a type of pancake made from sorghum flour and has a red bean paste stuffing. This delicacy is enjoyed during the winter months as sorghum is known as a health food that not only lowers cholesterol and helps in detoxification, but also keeps your body warm.

Even though most of the snacks mentioned on this list come with a red bean paste filling, they do taste distinctively different. The use of sorghum flour here gives the snack an earthy taste and the red bean paste helps balance it out by adding a subtle sweetness without being overpowering.

However, if you like your snack sweet, you can drizzle honey over the pancake. While there are many stalls that sell this snack, there is one particularly famous stall in Gwangjang market that even the locals rave about. It was featured on SBS back in 2013 and ever since then, there’s always a snaking line in front of the stall – you’ll notice it once you come out from Jongno 5-ga station’s exit 9. 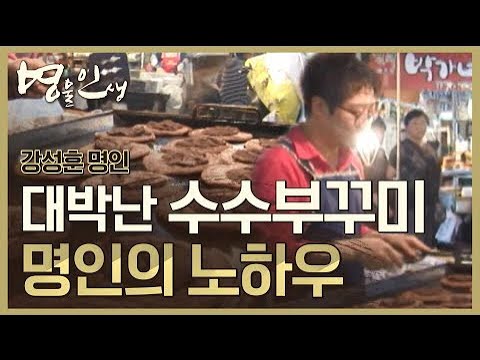 Locals recommend pairing these pancakes with makgeolli (Korean rice wine) as well, so don’t hesitate to grab a bottle and try this combination for yourself.

Check out our article here if you’re interested in making your own makgeolli at home. Ppeongtwigi is a general term used to refer to popped rice crackers that come in different flavours, shapes, sizes, and colours.

Since these classic plain rice crackers are not heavily seasoned and dissolve easily in the mouth, it’s suitable for kids of most ages.

Besides kids, adults also love this as it goes well with almost everything you can think of. Cream cheese, peanut butter, ice cream, and even caviar – there’s really no limit when it comes to pairing this cracker with your favourite topping. Yaksik is traditionally served during the first full moon of the Lunar New Year, known as daeboreum, but it’s also a popular snack to have on the go as it keeps you full for a substantial amount of time. It’s made with sweetened glutinous rice and a variety of nutritious ingredients, such as pine nuts, chestnuts, and jujube. The use of dark brown sugar gives the snack its distinctive colour and sweetness, and it’s also fragrant due to the addition of soy sauce and sesame oil.

There’s definitely a lot of snacks to choose from when you’re in Korea. But instead of stuffing yourself silly with the usuals, like spicy rice cakes and corn dogs, give your taste buds a treat by having a go at these 10 Korean traditional snacks. Try ticking off as many as you can and see which one tops your list. 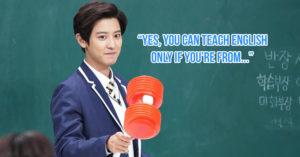 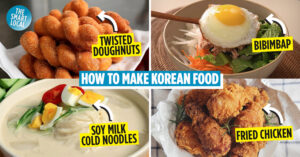