Doom at Your Service episode 1 highlights

Doom at Your Service is one of the most highly anticipated Korean dramas in May. The fantasy romance drama aired its 1st episode on 10th May, and received a decent viewership rating so far.

Here are 6 Doom at Your Service episode 1 highlights that made us feel that the drama will be comparable to one of the most popular fantasy romance dramas of all time, Goblin. Park Bo-young is well-known for her lead role in Strong Woman Do Bong-Soon. She played Do Bong-soon, a girl with incredible physical strength. Seo In-guk is a popular actor as well, and he took on lead roles in dramas such as Reply 1997, The Master’s Sun, and Shopping King Louie. In Doom at Your Service, Park Bo-young plays Tak Dong-kyung, and Seo In-guk plays the role of Myeol Mang. Doom at Your Service is about a girl, Tak Dong-kyung, who only has 100 days to live due to a terminal illness. Dong-kyung’s parents died when she was young, leaving her and her younger brother to fend for themselves.

One day, Myul Mang, an immortal with special abilities, shows up at her doorstep after she made a wish on shooting stars, and he offers to make her wish come true.

Doom at Your Service starts off on a heavy note as it was immediately revealed that Tak Dong-kyung was diagnosed with a type of cancer called glioblastoma, which doesn’t have a cure.

She is told that she only has 3-4 months to live if she doesn’t receive treatment. If she does, she can live for a year. Dong-kyung is also told that the biopsy process will take a week, but she is unwilling to take a week off work to go through with it.

When told that her health should take priority, she merely shrugs and says, “I’m not sure.”

Dong-kyung gets over her shock quickly and plasters a smile onto her face as she passes a document to the doctor. It turns out that the doctor is actually a client she was supposed to meet, and he is also a freelance writer.

The doctor watches her with concern as she continues to put up a cheerful front, and he tells her to press on.

From this scene, we find out that Dong-kyung is someone who puts work before health, which is not a healthy mindset. However, she may have her reasons, and we will learn more about her in future episodes. Watching Dong-kyung receive news of her terminal illness was already saddening enough, so it was even more difficult to watch her get used and abused by others later in the episode. It was like a never–ending chain of unfortunate events, right after she got her diagnosis.

After leaving the hospital, Dong-kyung gets a call from her boyfriend, who tells her to head to their usual cafe in an urgent tone.

But when she gets there, she receives a rude shock – her boyfriend isn’t waiting for her; his pregnant wife is.

His wife found out about his affair and decided to confront Dong-kyung. Without any introduction or warning, she throws a glass of water at Do-kyung’s face.

Dong-kyung, who didn’t know that her boyfriend was a married man, is initially filled with frustration and tries to defend herself. But afterwards, she tells his wife that she can put all the blame on her, if that will make her feel better about her husband.

Upon hearing that, the pregnant wife starts to get stomach cramps and collapses on the floor in pain. Dong-kyung rushes to help her.

At the hospital, the pregnant wife calms down and confides in Dong-kyung, telling her that she had suspected her husband of cheating for some time. Dong-kyung then tells her that she had meant it when she said to put all the blame on her. She also confesses that she only has 3 months to live.

Dong-kyung had wondered who would be the first person to find out about her condition, and didn’t expect it to be the wife of her now ex-boyfriend.

Later, she gets into trouble at work for coming back to the office late. Her unreasonable boss is a male chauvinist who blames her tardiness on her gender. He claims that this is why he shouldn’t hire women, and that comment makes the other female employees roll their eyes.

Her boss also finds a video of Dong-kyung and her ex-boyfriend’s wife online, much to her horror.

We catch a glimpse of the handsome head editor, Cha Joo-ik, here. He seemed like a decent person because he stood up for Dong-kyung, and we can’t wait to see more of him in later episodes.

Aside from her cheating boyfriend, Dong-kyung also has burdens such as a younger brother who likes to ask her for money, and school loans to pay.

That fateful day was also her parents’ death anniversary.

While drinking on the rooftop, Dong-kyung sees shooting stars in the sky and yells that she wants the world destroyed.

3. Myul Mang is a harbinger of doom We were first introduced to Myul Mang when he bumps into Dong-kyung at the hospital, after she receives her diagnosis.

Smirking at Dong-kyung’s shocked face, Myul Mang says that he knows he’s handsome, but he’s busy. With that, he walks away, leaving a stunned Dong-kyung.

What happens next is rather strange – despite being dressed like a doctor, he stands motionless and unbothered as nurses and doctors rush about treating injured victims from a slashing incident.

He appears to be waiting for someone. When the culprit of the slashing incident is wheeled in, Myul Mang bewitches both the nurse and the first aid officer, and gets them to leave him alone with the culprit. Myul Mang commands the heavily bleeding culprit to open his eyes, and he does. The culprit had tried to kill himself by slashing his own neck after his public slashing frenzy.

In an intimidating voice, Myul Mang accuses the man of “parking his car in his lot in the most awful way”.

He suddenly grips the man’s neck and heals his wound, telling the man that there are worse things than death. Myul Mang also tells the man that he is in control of the latter’s doom.

At this point, we were confused about his identity as Myul Mang obviously isn’t a regular doctor, yet he didn’t seem like a grim reaper or a goblin.

But we do know that he definitely lives up to his name. “Myul mang” means “doom”, and unfortunate incidents seem to occur whenever he is nearby. For example, when Myul Mang started the engine of his car, 3 cars in front of him collided into one another. He was completely unfazed by the accident.

When Dong-kyung gave chase to a pervert who was secretly taking pictures of women, the road suddenly gave way under the pervert. That happened just as Myul Mang, who was nearby, flipped on his lighter.

4. God is a female patient in the hospital

It’s revealed that Myul Mang works for God, who is a female patient in the hospital. This definitely surprised us because her appearance didn’t seem very god-like. It’s unclear if God will continue to take on the form of a female patient throughout the drama.

God describes herself as a gardener. When Myul Mang questions why she couldn’t just plant good flowers and give more attention to them, she says, “A garden doesn’t belong to a gardener.”

Myul Mang asks about his role in the garden, and she tells him that he will be her butterfly forever.

Myul Mang sulks, claiming that she’s being too harsh on the birthday boy. In response, she says that Myul Mang doesn’t have a birthday as he is not human at all.

It seems like Myul Mang is a man of many abilities. Aside from causing destruction and bringing people back from the brink of death, he can also listen to the wishes humans make on shooting stars.

One wish in particular catches his attention, and that is Dong-kyung’s drunken wish to ruin the world. Someone knocks on Dong-kyung’s door in the wee hours of the morning. Groggily, she peers through the door’s peephole and sees Switzerland. Confused, she looks again and sees Italy.

Dong-kyung opens the door warily and sees Myul Mang waiting. She recognises him as the doctor she had bumped into when she was at the hospital.

The peephole prank by Myul Mang was hilarious and reminiscent of the humour in Goblin, and we can probably expect more cheekiness from him in future episodes. Feeling perplexed, she asks why he was knocking on her door, and he says that she had called him earlier.

Myul Mang barges into her house and makes himself comfortable. He even takes a slice of her cake.

Myul Mang then tells Dong-kyung that she will die on 2nd March, exactly 100 days later.

Dong-kyung, who has been constantly gaping in disbelief throughout this encounter, refuses to acknowledge Myul Mang’s existence.

He says that he came because of her wish, and he wants to fulfil it for her because it’s his wish too. However, he cannot carry it out unless the wish – to destroy the world – is made by a human. Although she only said it because she was drunk, he insists that she make a real deal with him.

Myul Mang goes out of his way, literally, in order to convince Dong-kyung – he appears wherever she goes. He follows her to her office and bewitches her colleagues, making them think that he is a webtoon novelist so that he can meet her in her office.

However, Dong-kyung still refuses to believe that he was real, and constantly rejects him throughout the day.

In what seems to be Myul Mang’s last-ditch attempt, he orchestrates a car accident, with Dong-kyung at risk of getting hit by a lorry.

Just before the lorry hits her, time seems to stop and everything freezes except for Myul Mang and herself. This was an incredibly dramatic moment, and we hope to see more of such drama in future episodes. Standing in front of Dong-kyung, Myul Mang delivers one of the most iconic lines in the episode – and maybe even the whole drama – “God is on my side. Choose. Will you die here? Or will you take my hand?”

If you squealed when she took his hand and “D-99” flashed on screen, you’re not alone.

The episode ended there and left us hungry for more information. Who exactly is Myul Mang, and why is he hell-bent on destroying the world?

The 1st episode of Doom at Your Service introduced us to Myul Mang and Dong-kyung, but Myul Mang’s identity still remains a mystery. We have yet to see the other main characters, Na Ji-na and Kang Tae-oh.

These Doom at Your Service episode 1 highlights show us that the drama has a lot of potential, and it may even be as popular as Goblin if given a chance to flourish.

Doom at Your Service airs every Monday and Tuesday at 9pm. 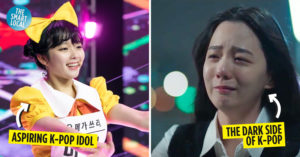 7 Imitation Korean Drama Episode 1 Highlights That Prove This Drama Is Worth Your Time
Girls' Generation Yoona Said To Star Alongside Lee Jong-suk In A New Lawyer Drama "Big... 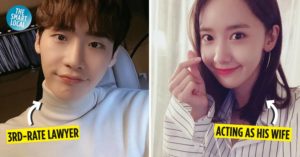