Baskin Robbins – an American ice-cream chain – has opened a new store in Korea, but what makes it special is how it sits in a hanok. The Baskin Robbins Samcheong Madang store not only lets customers travel in time but also serves fusion Korean desserts that mix traditional and modern flavours together. With the rise of hanok cafes, it’s no surprise the Baskin Robbins has decided to jump onto the bandwagon and open their first hanok store in Korea. The Baskin Robbins Samcheong Madang store recently opened its doors on 23rd October 2020. The new store’s name includes “madang”, which means “courtyard”, as the cafe’s layout includes a courtyard typical of traditional hanoks. Customers can sit inside the store, which is furnished with modern wooden furniture. If you want to immerse yourself in nature, you can sit outdoors in the madang and bask in the sun, just like people did back in the day. Red bean and sweetcorn toppings used for the ice creams are stored in 2 golden traditional Korean stoves at the counter, further driving home the newtro appeal of the hanok store. Desserts and drinks are served on a modern gujokban – a portable dining table commonly used during the Joseon dynasty – and customers are provided with traditional golden sujeo (cutlery). The new hanok store comes with an exciting menu featuring newtro flavours where traditional Korean favourites, such as black sesame and rice cakes, are incorporated into modern desserts and drinks. Fresh on the menu is the Madang Soft Serve (KRW4,500, ~USD3.99), which comes in two flavours – black sesame and corn. The soft serve is drizzled with light sesame oil to add a savoury finish to it. The Wawa Tteok (KRW5,800, ~USD5.15) transforms Korea’s traditional tteok – also known as rice cake – into the shape of a waffle. The waffle is crispy on the outside and filled with chewy injeolmi tteok on the inside. The dessert is served with a scoop of vanilla ice cream. Try the Sibjeondaebo Tea Blended (KRW5,900, ~USD5.24), which gives you a taste of unique Sibjeondaebo herbs in perfect harmony with pear slush. The drink is topped with honey-dipped walnuts and jujubes. For the same price, you can also get the Black Sesame Zzontteok Blast, which combines savoury black sesame with sweet mochi. The Madang Sundae (KRW5,200, ~USD4.61) is the store’s main signature item, only sold at the Samcheong-dong Madang branch. It comes in 2 flavours – Honey Butter Corn and Black Sesame & Red Bean. The new Baskin Robbins store is located in the peaceful neighbourhood of Samcheong-dong – also home to the Bukchon Hanok Village. Customers with the HappyPoint app can enjoy a 30% off for purchases made at the new branch from now till 19th November 2020.

Check out other new openings and releases in Korea: 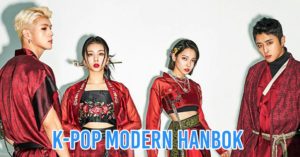