The green movement is all the rage these days, and the same goes for cafes in Korea. These days, greenhouse cafes have become increasingly popular as they let you get in touch with nature while chilling with a drink. Experience nature indoors at Forest Outings, a cafe with a lush garden, fountain, and even a mini man-made lake. Forest Outings is eye-catching even from the outside, with its tall, house-shaped brick exterior and arched windows. The interior of the cafe is even more breathtaking, being entirely consumed by greenery. The effect resembles a chapel maintained by a millennial obsessed with plants. Tall plants dot a large area of the cafe, and potted plants are placed all around the cafe. To add to the natural aesthetic of the cafe, synthetic grass is used as flooring for some parts of the premises. The cafe has 2 floors and there is an abundance of seating options on both floors; there are even seats along the steps that connect the first and second floors. Natural lighting is abundant in the cafe as there are plenty of floor-to-ceiling windows on the sides of the building. There are also glass panes on the roof, letting sunlight stream in just like how a greenhouse would. A trademark feature of the cafe is its use of red brick. The walls and pillars of the cafe, as well as the exterior of the building, are all made of red brick, giving the cafe a timeless and rustic look.

Lake with a fountain & bridge in the middle of the cafe True to its name, Forest Outings has a mini forest in the heart of its interior. In the middle of the ground floor, there is a mini man-made lake with a smalli fountain, which is illuminated by a brightly-coloured light. The mini lake is surrounded by all sorts of trees, including many species of palm trees. There’s an arched bridge that spans the lake, letting customers cross over the water. This bridge is lit up by a strip of LED lights on its edge, as well as hanging star light decorations. At Forest Outings, you can not only feast your eyes, but also your stomach. There is a bakery-like section of the cafe with several tables displaying all sorts of pastries and sweet treats, from cream-filled croissants to slices of strawberry shortcake. Getting to Forest Outings 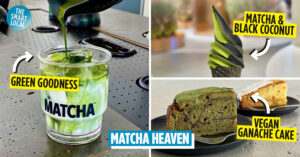 Super Matcha: A Cafe In Seoul That Sells Matcha Drinks With Unique Flavours Such As Coconut & Chai
Money Heist Korea Review: How A Group Of Thieves Plan To Dominate Unified Korea’s Currency 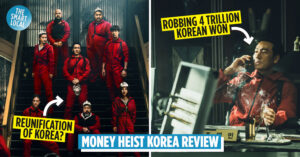