If you are an avid K-drama fan or have visited Korea, you’d have noticed some common practices that don’t quite make sense. Without a strong historical knowledge of Korea, you’re bound to be confused when you encounter these curiosities. To save you from racking your brains, we’ll unpack and explain 10 everyday mysteries in Korea for you.

1. Why are Koreans 1-year-old when they are born? When Korean babies are born, they are immediately considered a year old. That’s because Koreans take into account the 9 odd months that babies spend in their mother’s womb. And that’s why the Korean age – also known as 세는나이 (se-neun-na-ee) – is always 1 year more than the international age, which is calculated from the year you’re born.

Another unique thing about the Korean age is that it simultaneously changes for everyone at the start of a new year, regardless of birthdate. Koreans still celebrate their respective birthdays but their legal age changes on 1st January every year.

2. Why do Koreans eat kimchi during every meal? Kimchi, a representative dish of Korea, goes back to 37 BC when fermented dishes were favoured because of their long shelf life. The ingredients needed to make kimchi were cheap, so even the poor could make their own and have it for every meal.

The tradition of consuming kimchi continues to be observed today. Apart from its addictive spicy and sour taste, the popular side dish is also rich in vitamins A and B, as well as lactobacilli. Kimchi is known to aid digestion, boost gut health, and improve metabolism. There are more than 200 types of kimchi in Korea, but the one most commonly eaten is called 배추김치 (bae-chu-kim-chi). Baechu kimchi, when freshly made and served, complements Korean food dishes well. In Korea, most restaurants serve kimchi on the side, except for fast food chains or places that serve non-Korean cuisine.

Kimchi has also been incorporated into main dishes such as stews, stir-fry, pancakes, fried rice, and even pizzas – that’s how much Koreans love kimchi.

3. Why do people leave empty bowls outside shops along the streets? Food delivery is a common affair in South Korea, even before the pandemic. With the wide variety of 배달음식 (bae-dal-eum-shik) – food available for delivery – you can easily satisfy your food cravings around the clock, almost instantaneously.

Korean restaurants often deliver to nearby areas and some choose to send over their food in reusable plastic bowls. After around 2-3 hours, the delivery riders would return to retrieve the used bowls and plates. Therefore, it’s not surprising to see dirty dishes being left outside shops or apartment units, waiting to be collected. If you’re staying in Korea and want to order food, it’s useful to get a list of phone numbers of your favourite restaurants that deliver, or download delivery apps such as Yogiyo and Baemin.

4. Why do some buildings not have a 4th floor? In Korea, it’s common to see lifts with buttons that replace “4” with “F”. Some buildings even skip the 4th floor altogether.

That’s because the Sino-Korean word for “4” is “사” (sa), which is pronounced the same way as the hanja for “death” (死). The number “4” is associated with bad luck for this reason, and “F” is used in place of the number since it’s the first letter in the word “four”. Tetraphobia – the fear of the number “4” – is also common in Asian countries such as China and Japan. Some people even avoid purchasing apartments with unit or block numbers that include the number.

5. Why can’t you flush toilet paper down the toilet bowl?

Many public and restaurant toilets have signs telling you to throw your toilet paper into a trash can instead of flushing it down. This is to prevent toilets from getting clogged.

The practice started in the 1980s, when most public bathrooms only had squat toilets without a plumbing system. Even after flush toilets were installed, it took awhile before Korea started producing toilet paper that could dissolve well in water. Hence, users were still discouraged from flushing toilet paper. Thankfully, in the past decade, the government has progressively gotten rid of such trash cans for hygiene reasons. It’s now acceptable to flush down toilet paper at most places, but older areas that lack modern sanitation facilities still follow the old practice.

If there’s a sign saying not to flush down toilet paper, it’s best that you heed it, lest you cause a mess.

6. Why are the surnames Kim, Lee, and Park so common? There are more than 250 Korean surnames used today, but the top 3 surnames – Kim, Lee, and Park – are used by approximately half of the population. The most common surname in Korea is Kim.

During the Joseon dynasty, around half of Korea’s population were slaves without legal names. After the 2 wars against Japan and China in the 17th century, the monarchy allowed the buying of names. Slaves saved up to buy themselves a name, and they naturally gravitated towards the surnames of royalty and noble families in order to elevate their social status.

7. Why do Koreans always ask about your blood type? Koreans believe that one’s 혈액형 (hyeol-aek-hyeong), or blood type, gives an insight into one’s personality and characteristics. Some people even use it as a gauge of romantic compatibility and will ask for the other party’s blood type on a first date.

Blood type As are known to go well with type Os, while blood type Bs are compatible with type ABs. These days, Koreans have also taken to asking for one’s MBTI.

8. Why is plastic surgery so popular in South Korea? Beauty standards in Korea are strict, more so than in other countries, and the pressure to maintain one’s appearance is immense. It’s not surprising that a sizeable number of people eventually choose to undergo plastic surgery to keep up with society’s idea of beauty. South Korea ranks 1st for having the most plastic surgery procedures done per-capita. The most common procedure is double eyelid surgery (쌍꺼플수술; ssang-kkeo-peul-su-sul), which creates an eyelid crease that makes eyes look bigger. It’s so common that Korean parents would even offer to pay for their children’s double eyelid surgery before they enter university.

Thanks to K-pop and K-dramas, medical tourism in Korea for plastic surgery has surged. Many foreigners choose to have procedures done in Korea due to the expertise of Korean plastic surgeons.

9. Why do Koreans choose soju and beer over other kinds of alcohol? The drinking culture in Korea is strong and binge drinking is the norm. Locally-produced alcoholic beverages, such as soju, beer, and makgeolli, are ridiculously cheap. Koreans also love alcohol concoctions made with soju and beer, such as 소맥 (so-maek) and 소맥사 (so-maek-sa), which contains soju, beer, and cider. Ahjummas hate the sun, which is why they’ll do anything to avoid it.

Even when it’s not a particularly sunny day, ahjummas would still wear long-sleeved shirts and long pants. They’re not shy to whip out their 양산 (yang-san; sun umbrellas) when sun rays hit them. And instead of shielding their eyes with their hands like us peasants, ahjummas don sun visors, ensuring UV protection everywhere and anywhere.

Korea’s long history and culture results in a plethora of practices that are ingrained in Korean everyday life. However, they can be confusing to foreigners who do not know the context and motivations behind such practices. Now that you have answers to some of Korea’s mysteries, go forth and enlighten your puzzled friends. 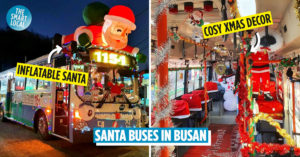 Santa Buses In Busan Bring The Christmas Party To You, Complete With Decorations & Free Treats
Haeundae Blueline Park: This Closed Railway Is Now An Attraction With Picturesque Coastal Views 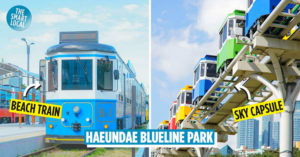