The wait is over – Shin Ha-kyun, who starred in Beyond Evil, has won the “Best Actor” award at the 57th Baeksang Awards.

The award ceremony was hosted by actress Bae Suzy and comedian Shin Dong-yup, and broadcasted live on JTBC, a Korean cable channel.

Here’s the complete list of winners for the TV and Film categories.

Nominated for his role in Beyond Evil Shin Ha-kyun was nominated for his role in Beyond Evil, a thriller drama set in the quiet rural town of Manyang. A serial killer has been running loose in Manyang for the past 20 years, and due to a series of machinations from the upper ranks of the police, a real estate businessman, and a councilwoman, the murders have never been solved.


Shin Ha-kyun played Lee Dong-shik, a detective who was demoted and banished to a police station in his rural hometown, Manyang. To complicate matters, Dong-shik was the prime suspect of 2 murders that took place 20 years ago, and one of the victims was his own sister.

Other nominees for the “Best Actor” award

Shin Ha-kyun faced strong competition for the “Best Actor” award. The nominees were as follows: Kim Soo-hyun was nominated for his role in It’s Okay to Not Be Okay. He played Moon Gang-tae, a caregiver who works in a psychiatric hospital. He lives with his older brother, who has autism and suffers from frequent nightmares involving butterflies.

Gang-tae is an empathetic person and works hard at his job, but for mysterious reasons, he has to change jobs every year. He meets the charismatic Go Moon-young, an author of popular children’s books. As it turns out, this wasn’t their first meeting – the pair used to hang out as children, until fate separated them. Uhm Ki-joon was nominated for his role in The Penthouse: War in Life, where he played the role of Joo Dan-tae, an evil but successful real estate magnate. He’s involved in a complicated web of conspiracies and lies that spun out of an attempt to cover up the murder of a high school girl named Min Seol-ah. Song Joong-ki was nominated for his role in Vincenzo. He played the titular Vincenzo Cassano, a lawyer who worked for the Cassano mafia family as the consigliere. After the death of his adoptive father, he leaves Italy and returns to South Korea to retrieve the gold he’d hidden in the basement of a building years ago.

Despite his initial misgivings, he grows closer to the tenants of the building where his gold is hidden. He works together with a fellow to take down Babel Group, the corrupt company that has illegally taken over the building, and stop them from evicting the tenants. Lee Joon-gi was nominated for his role in Flower of Evil, a thriller about a man with a mysterious past, and his wife, who’s investigating a string of unsolved murders.

Lee Joon-gi played Baek Hee-sung, a man who’s hiding his real identity and past from his wife, who works as a detective. The two have a loving and perfect relationship on the surface, and they have a daughter together. However, as his wife starts to dig deeper into the murders, Hee-sung’s life and web of lies start to unravel.

Congratulations to Shin Ha-kyun, the winner of the “Best Actor” award at the 57th Baeksang Arts Awards. We can’t wait to see what’s in store for him in the future, and what projects he’ll tackle next.

For more articles about K-dramas, check out: 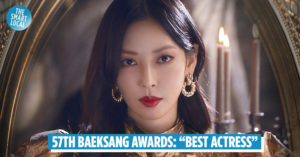 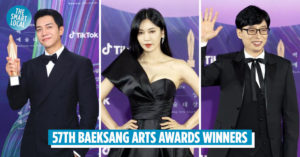