Earlier this year, Park Bo-gum made a cameo appearance in Park Seo-joon’s drama, Itaewon Class (2020). And it looks like Park Seo-joon will be returning the favour with his upcoming cameo appearance on Record of Youth, which just started airing this month. Could this perhaps be the start of a new bromance between the two?

Park Seo-joon to make a cameo in Record of Youth Park Seo-joon agreed to appear in the drama because of his friendship with Park Bo-gum and his positive relationship with Ha Myung-hee, the writer of the show with whom he worked on One Warm Word (2014). While he has completed the filming, there’s no confirmation on when the cameo will air. It’ll most likely be from Episode 9 onwards as several media outlets have mentioned that the scene will be aired anywhere from the middle to the end of the drama. As many fans may remember, Park Bo-gum made a cameo appearance in the final episode of Itaewon Class earlier this year. Park Seo-joon, who starred in that drama, decided to return the favour by appearing in Record of Youth. Park Seo-joon and Park Bo-gum’s friendship can be possibly mapped all the way back to the 2017 BTS Live Trilogy Episode III (Final Chapter): The Wings Tour, where they snapped backstage photos with BTS’ V. Image adapted from: @BTS_twt and @BTS_twt

Last year, the two were spotted attending the BTS World Tour Love Yourself in Seoul concert to support V again. Since both of them are part of the same circle of friends, we have reason to believe that there’s a budding bromance between the two talented actors.

Watch Record of Youth on Netflix Record of Youth is centred on the rough journey of Sa Hye-jun (Park Bo-gum), a model who dreams of becoming a successful actor, and Ahn Jung-ha (Park So-dam), a makeup artist.

The 1st episode aired on 7th September 2020 and the drama has been well-received by viewers so far, achieving high viewer ratings each episode.

New episodes air on TvN on Monday and Tuesday, 9PM KST, and international viewers can watch the drama on Netflix.

For those who are already enjoying the visual treat in Record of Youth, it will only get better when Park Seo-joon makes his cameo appearance. But for now, fans will have to wait patiently while following Record of Youth’s heartwarming story. 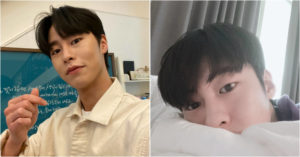 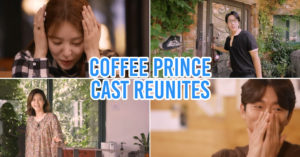